Imagine a time when you were walking through life without knowing much about anything around you. How you got here, how old the planet is and it’s place in the galaxy was a total mystery until not that long ago. Because of the vast mystery that enshrouded every single person back in those days the natural proclivity was to embrace religion and the explanation that it provided. Mythology, doctrine and dogma provided a sense of relief and comfort to this thing we call consciousness.

Time marches on of course and new explanations have come to light. Mans focus on pursuing science has no doubt given way to incredible insight into the origins of our species, the planet we live on and the universe as a whole. Going beyond just our origins we’ve gotten very creative with our ingenuity and now understand how to accomplish great feats that would have seen most men burn at the stake for their heretic suggestions. Remember, even Galileo wasn’t believed at first and faced a roman inquisition for heliocentrism.

Fast forward to now. We live in an age where so much of our surrounding worlds both inside and outside of us can be quantified, categorized and analyzed to the point of exhaustion. It almost seems that we are on a track to figure everything out. Because of this more and more people are starting to abandon the idea of mysticism or religion in favor of cold hard data. This is the age of Big Data.

Technically speaking the term “Big Data” refers to the way in which our modern computational power gets hung up on the amount of data and thus needs to rethink it’s relationship to it in and of itself.

Big data is a broad term for data sets so large or complex that traditional data processing applications are inadequate. Challenges include analysis, capture, data curation, search, sharing, storage, transfer, visualization, querying and information privacy. The term often refers simply to the use of predictive analytics or certain other advanced methods to extract value from data, and seldom to a particular size of data set. Accuracy in big data may lead to more confident decision making, and better decisions can result in greater operational efficiency, cost reduction and reduced risk.

Moving beyond the academic definition however, we will also see that Big Data is also a descriptor for the age in which we are currently living in. We’ve moved beyond the Information Age and into a brave new subset of where technology and science has not only grown so incredibly huge and precise but it’s also given meaning to the way we live. Science has taken the place of God.

For example, here are three very basic and now commonplace occurrences of Big Data in action.

Many millennials define themselves by their social media profiles and how those data sets mirror the projection of what it is they think they are. And that accompanying algorithm for how to keep up and market to this set of people is becoming increasingly complex and onerous. Or take a very rudimentary understanding of a discovery found within Quantum Mechanics that basically says that light and matter are made up of the same stuff. Another example might be; take an analytical dive into the study of the human genome project that’s setting out to map our entire DNA structure from a functional and physical standpoint.

There are endless other examples of how the measurement of our physical world has gotten so precise and qualitatively satisfying that has in fact given way to not just the material world but also our existential one. The increasing accuracy of science and it’s accompanying technology is now defining who we are, how we got here, our purpose for being here and is giving us the ability to somehow fit those concepts into a measurability that makes sense to us.

Of course it’s true that most of us, including myself, don’t understand the actual complexity of the living and breathing Big Data machine that surrounds our daily lives. The sheer amount of storage space that Facebook is using everyday boggles the mind. Or try explaining credit default swaps to me, I don’t get it. Still.

Here’s a great short essay on the possibility that we’ve already moved to the age of technology being indecipherable:

Given these facts, there is also an endless amount of technology that I depend on every day that I have no idea how it works. Yes, I maintain faith that it will keep working.

The key word here being faith. What I’m starting to notice is that within the last 20 years the rise of science and Big Data has started to chip away at our traditional definition of faith. One can argue that chipping away at the draconian religious structures is a good thing, which I won’t disagree with. But what is alarming and more problematic is that Big Data has also taken a bite out of mysticism. The rise of atheism and lack of mysticism is directly tied into the rise of the age Big Data.

Look at the rise of either religious polling data provided by Gallup since the dawn of the World Wide Web in 1995. 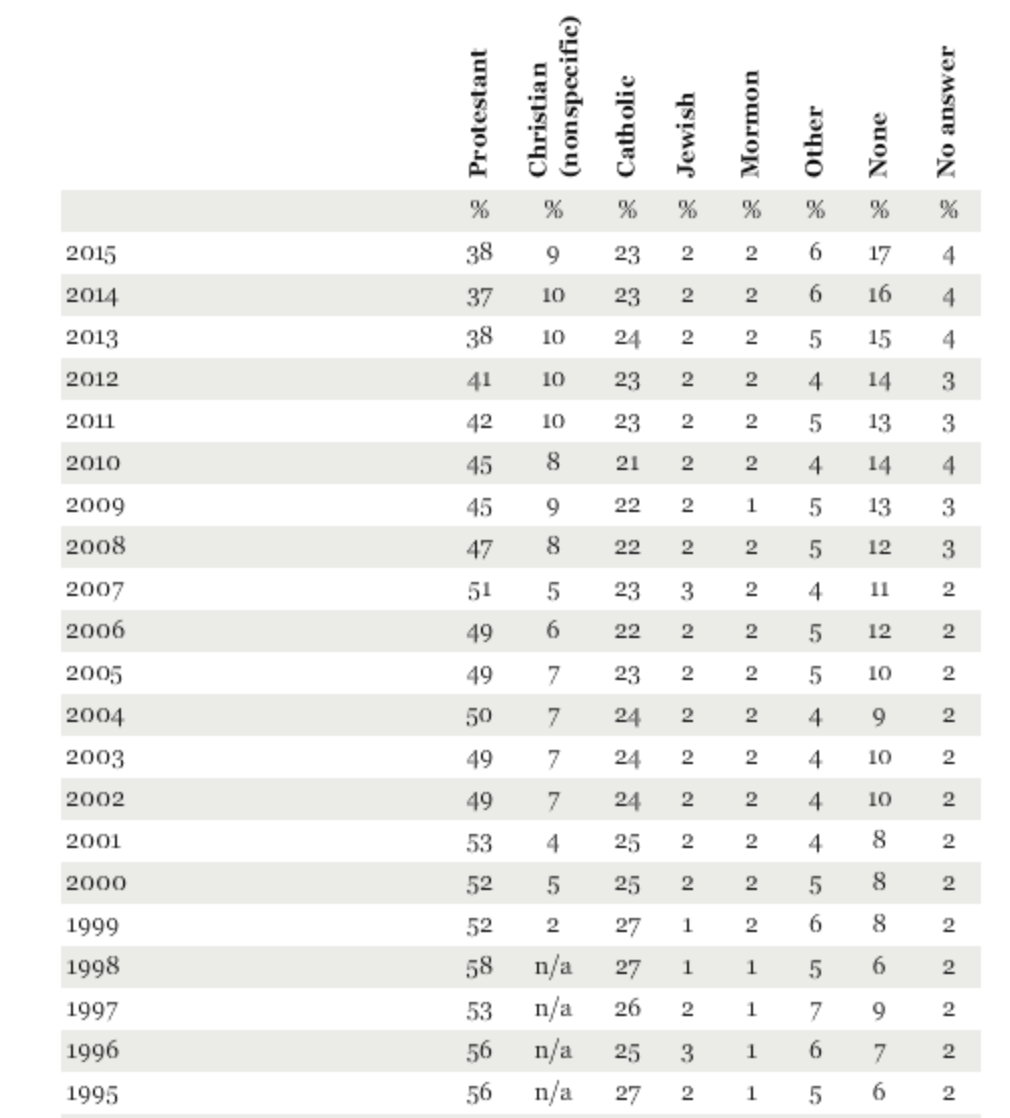 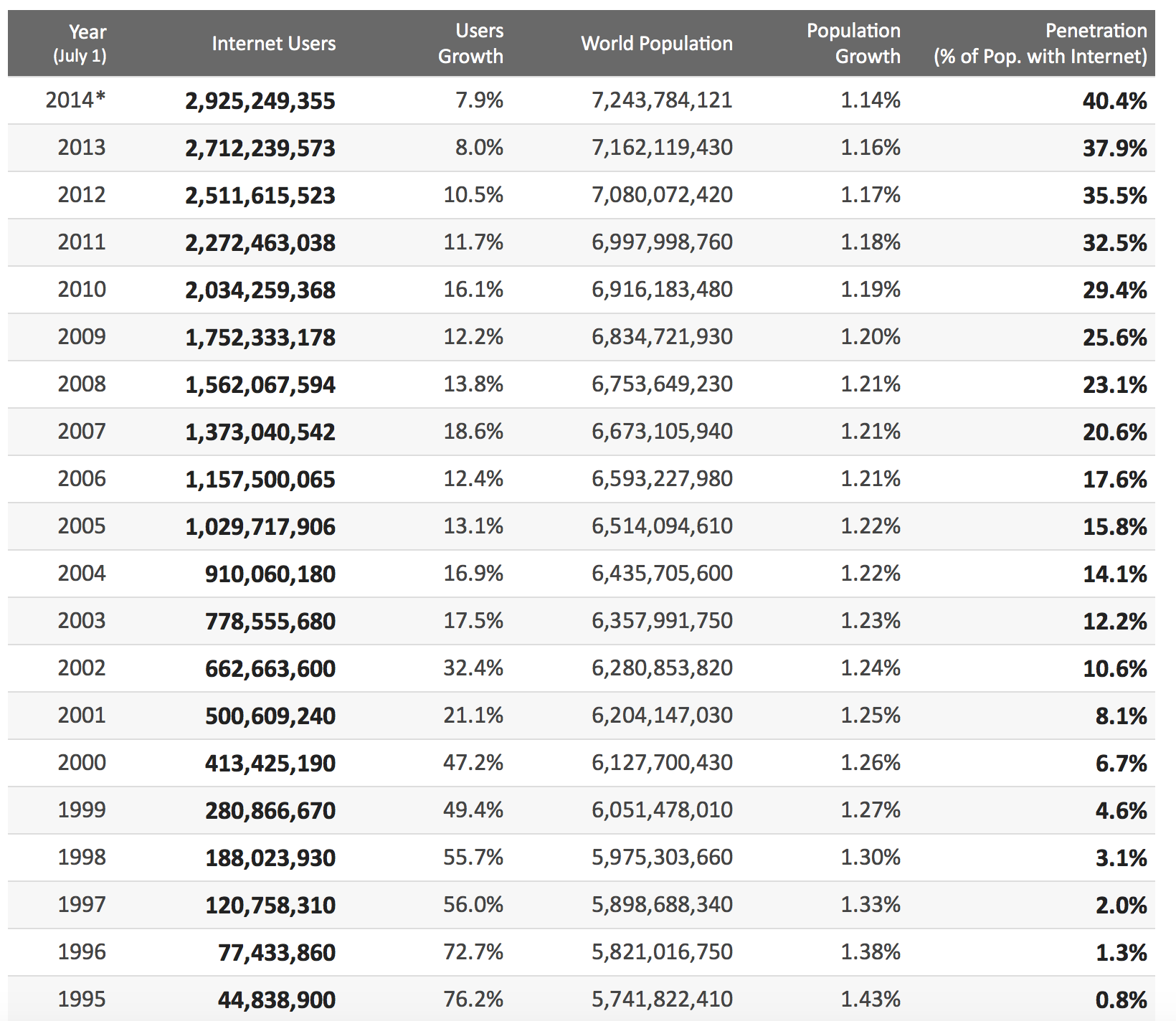 The first glaring note is to point out that Internet usage, in and of itself, does not equal a rise in scientific beliefs. But it does represent a broad view of how human society has embraced the age of Big Data and all the tangents that have sprouted off from it. Our humanity now existing in a digital form call the World Wide Web is happening with such great acceptance that one can assume that it is a mass adoption of a scientific way of viewing the world and thus it can make sense for this argument.

I don’t think it’s any coincidence that both sets of data, Internet usage and Atheism identification, are rising at the same time. Furthermore as the technological trends morph and adoption rates continue to increase into areas such as nano technology, bio tech and other trans-humanist utopian fantasies we will continue to see more and more people shun the labels of the great religions of yesterday and identify with “nothing” because it’s the only religious label that may fit. It’s the only label that means no mystics, just data.

There is strong evidence, however, that suggests more and more people are identifying with the whole “spiritual but not religious” label but not to the detriment of people still favoring the atheist label instead. That’s another tangent to explore. Certainly, the long term effect of how the whole radical Christian/radical Islam game plays out will have an effect on these data sets over time.

Going back to mysticism and Big Data, it is my hope that our species won’t merely rest on the “facts” that data provides but rather on the manifest of God that can be found in the circuitry that we are creating. For me, the Godhead is taking form in the connectivity that we have invented that takes disguise in the Internet, VR, nano tech and AI. Just as a tree creates an apple, a human creates a computer.

In here somewhere is God working itself out in a way that’s talking to us. We just can’t hear it yet.

And let us not forget the great words of Terrence McKenna  – “There exists a dimension beyond language, it’s just so damn hard to talk about.”

One thought on “Atheism and Big Data – a love affair”