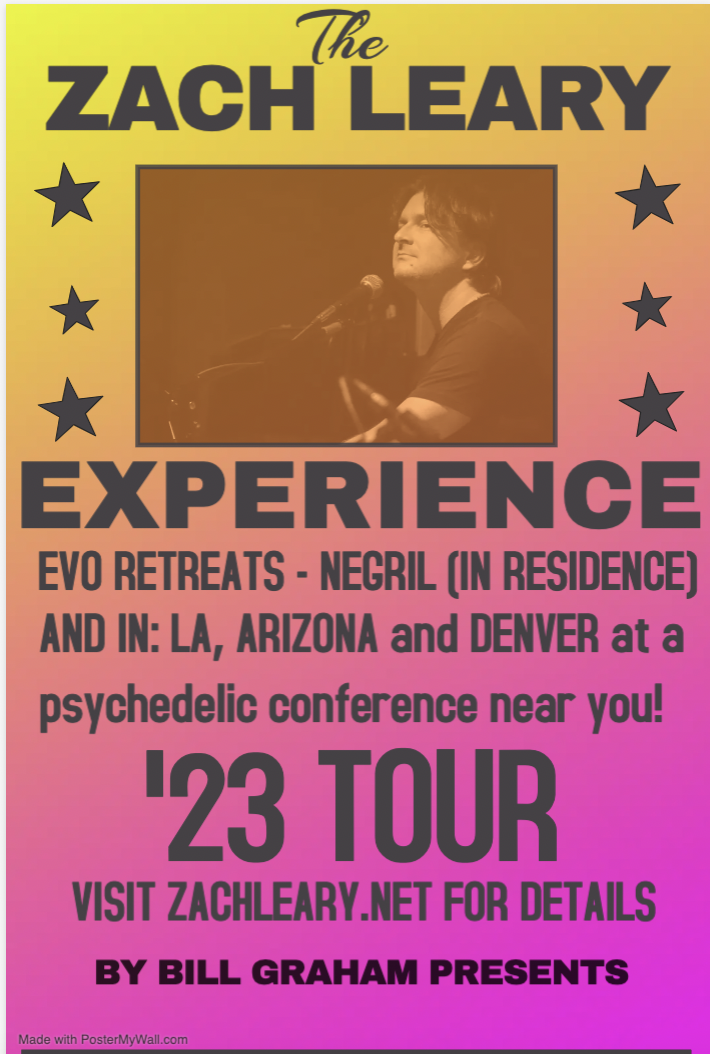 I’ll be in the following cities in ’23, check back often for new additions.

April 28 – May 1: The Science of Psychedelics in Phoenix. A plant medicine conference that’s gathering some of the finest minds in the field. 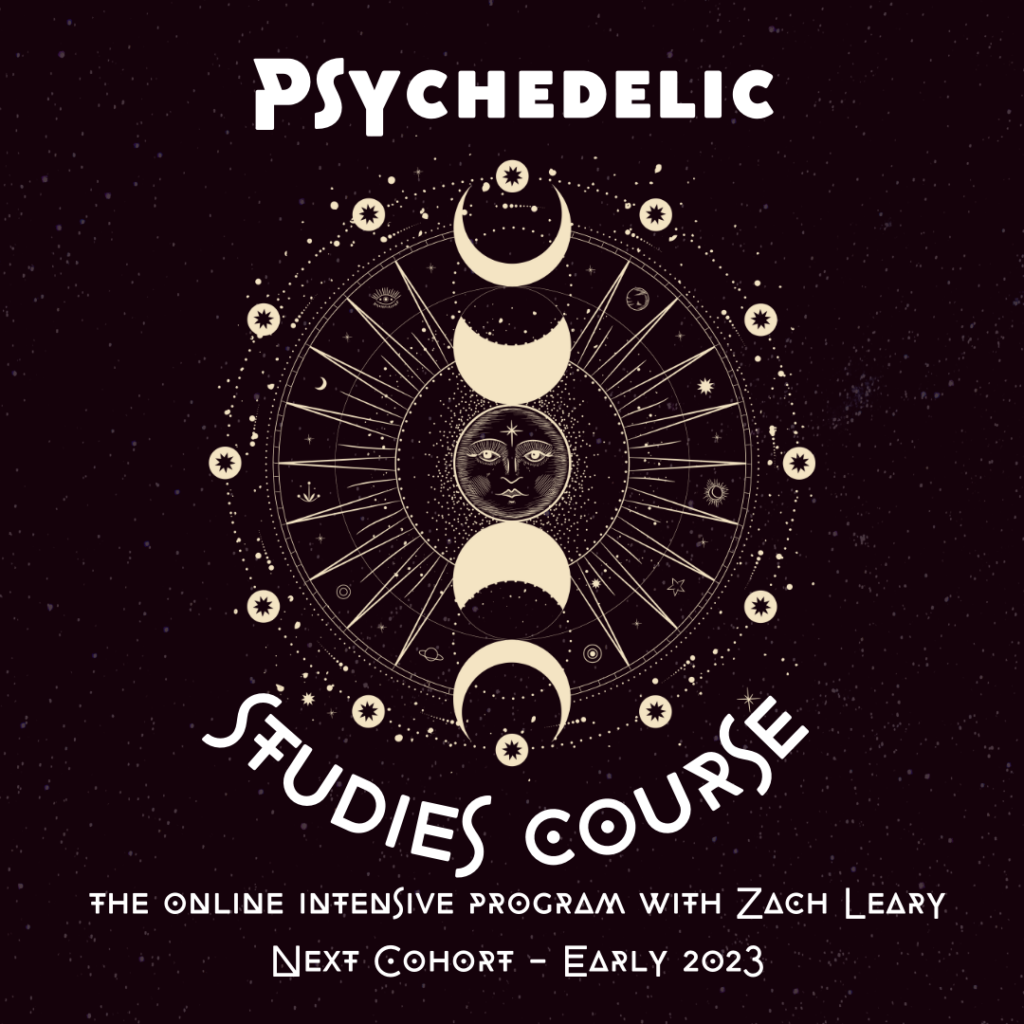 I’m happy to announce that the next cohort will begin on Feb 8th and end on April 29th, 2023. Over 60 students now have gone through the course and have come through it inspired and passionate about the ever changing world of psychedelics in the 21st Century!

Please click here for more information on the course and to enroll!

I hope to continue to share my journey and knowledge with you. Thank you!

I’m thrilled to announce that my new book “And Now The Work Begins” will be published by SoundsTrue in late 2022 or early 2023. The book serves as a manual for psychedelic integration while taking an exploratory look at set and setting and how it can be re-examined for use in the 21st Century.

My observations over the past few years has shown me where the psychedelic renaissance has succeeded and where its fell short. While the experience of psychedelic journeys can be profound, they can also form escapist patterns if work isn’t put into post-journey integration.

Partnering with SoundsTrue is a dream come true and I’m humbled at the opportunity to share my voice with a larger audience. Please continue to visit my site and listen to the MAPS podcast for updates on the project.

it's All Happening Podcast

I’m sorry that the IAH podcast went dark for so long. While I’m in the process of re-syndicating it back to all the podcast portals, here is a link with all 136 episodes for streaming.

Thank you for your continued support.

This happened a few months ago but wanted to re-post because it was so much fun. Duncan and I were guests in the VR talk show that is Gunters Universe. Enjoy.

Real time excerpts from my upcoming book “Who Are You Now? Technology, spirituality and the search for our very own identity”

Whatever you think reality is. That’s not it. That’s why these practices are so important. They are methods which can pierce the veil which then allows us to view things as they really are. Yoga, meditation, kirtan, psychedelics, making art, whatever..they all reveal the same a-ha moment. It’s just that those moments are short and fleeting. That’s why we do them regularly.The true value in any practice is the remembering, the taking it with you in everything you do. The Gita defines it “as remembering Krishna in every action you perform.” When you do that, this thing we call reality has more meaning and can certainly be a lot more fun to play around in.

I have a new talk that I’m beginning to get a handle on called “Creating Value in the 21st Century.”

It’s based around the idea of pushing our culture to see value beyond antiquarian measurement systems like the GDP or the DOW and move towards the inclusion of social and connection value systems that the new culture paradigm is establishing. For instance, the value of the United States as a country is still measured in the GDP, or the Gross Domestic Product, and as long as that number is going up our value as a society is as well. For reference it is defined as ‘the total value of goods produced and services provided in a country during one year.’

Adding to that, there is a formula where the actual GDP number itself derives. Investopedia lays it out in the the following way:

C is equal to all private consumption, or consumer spending, in a nation’s economy, G is the sum of government spending, I is the sum of all the country’s investment, including businesses capital expenditures and NX is the nation’s total net exports, calculated as total exports minus total imports (NX = Exports – Imports).

I am not an economist however, I understand that as an economic indicator in and of itself there remains popularity in the GDP because it deals with not just the value of what’s sold but also of the materials that go into whatever it is that is sold. So, theoretically the entire supply chain is accounted for.

If we take that snap shot and use it as the tell tale lens for a peoples overall health as a nation I propose there is something very flawed about that because it doesn’t take into account all the subtle, spiritual, inspirational, thought provoking and peer to peer work that most of us our doing on any given day. Therefore, with all of our insanely amazing ability to think, inspire and grow ourselves into these increasingly complicated biological connection machines there has to be a system of measurement that goes beyond just rudimentary manufacturing and sales variables that make up things like the GDP.

Let’s take the example of a favorite yoga teacher within your community. Let’s say your specific community and friend pool has a yoga teacher that is everyones favorite. His or her regular classes are usually packed and the feeling that is felt when leaving the class is commonly experienced to be ecstatic, inspired and transformational. For the sake of this example let’s say that there are 50 people who are in each class 4-5 times a week and of those 150 are unique (the other 50 being repeats). Those 150 people go out into the world completely changed people and take that change into their own individual lives. It’s without question, they are better teachers, parents, workers, lovers and friends all as a result of this one yoga teacher. Therefore the exponential effect that this one person has on the endless touch points of the 150 students is enormous and unmeasurable. If you really think about it, this yoga teacher may indirectly effect thousands of lives. Literally. That is value. That is real, tangible, un-esoteric value that makes the fabric of our society a better place. Yet, this person is often ignored as a value stake holder unless he or she creates a business around it.

Let’s look at another person. Let’s make it up and just say this person is the CEO of a successful pen company. Plugging in the variables lets determine that the pen company is in the US, does not outsource manufacturing, has been profitable for the last several years and employs around 300 people. Certainly, employment is good because it allows the worker to earn money that can provide for food, gas and various living expenses. Thus the town that the pen company is headquartered experiences value because of local tax revenue and steady employment for many local families. Because we’re assuming the pen company is profitable that means the CEO is wealthy as is credited for stimulating the GDP and might be heralded as a powerful and valuable person because of his or her ability to guide the success of the company. That CEO may rise to fame and fortune because he or she has managed to create a financial eco system that makes good on the American dream. These are the heroes of our society – take Jack Welch or Henry Ford for example.

When comparing and contrasting the two people and their function in society I’m sorry but I do not see the pen company CEO as providing more value than the amazing yoga teacher. It’s just that the value of the pen company can be measured so specifically and with great precision that we have gotten in the habit of only looking at value this way. This is flawed. The yoga teachers value, while not instantly measurable, provides for healthier, more compassionate, stable and inspired people which when trickled out into the world is certainly very powerful.

There are many more examples that I can illustrate. Many of which go beyond employment mechanisms and roles and stretch out into more nebulous realms like social media and media. More on those in follow ups to this post.

The point is that I think we need to stop and re calibrate our overall value systems. I don’t propose we do away with gigantic pillars of the industrial age but I do propose we integrate new thinking and consider new combinations of system indictors as we move into the future.

This was from the BioEthics Film Conference that was at University of Penn back in April. After “Dying to Know: Ram Dass and Timothy Leary” played myself, Rick Doblin and Dominic Sisti conducted a panel on the implications the film made on bio-ethics, psychedelics and cultural influences.

The entire piece can be found here

My quote was as follows “I don’t believe there is a disembodied plant intelligence that lives outside of us, outside of our own consciousness or outside of our own hearts,” says Leary. “I believe psychedelic mysticism and psychedelic practices really just pierce the veil. They lift the veil and allow you to merge into the one and allow clear vision to see everything that’s around us, everything that’s possible and every screaming electron that’s flying around throughout the Universe right now that makes up our collective consciousness; which is really a disembodied collective consciousness. Psychedelics allow you to jump into that disembodied experience, where the one can be realized and you can feel it in your own heart.”

In the spirit of honoring things for how they truly are, I want to share that I feel a lot more sad than I thought I would feel today. Not for the loss of your great life but for all the time we spent together that didn’t happen. For all the songs we didn’t sing and for all the birthday parties we didn’t have. For all the hang ups I wish I didn’t have at the time. For all of the love I didn’t know how to express. I love you now more than ever.

And yes I am beyond grateful and amazed for all the time we did spend together and for all the time and love you did give me. You put a lot into my incarnation and I’m thankful for that. Don’t let me get away with whining selfishly about what I didn’t get. I got a lot.

When relationships grow in the spirit world, as this one does, they weave their way into the tender tapestry of every single breath and possibility that every single moment has to offer. I take you with me when I can and rest on my faith that you’re giving me that TL wink of approval as I settle into my own path and adulthood. I too have felt the burn of your frustrated scorn that comes from your genius-biased as you’ve witnessed the many mistakes that I probably didn’t need to make again. Through the juxtaposition of the two is where I feel your presence and continuous spirit guide in my life. Please stay right there, you’re needed.

Boy that was a fast 20 years, damn. I remember May 31, 1996 as if it were yesterday. I remember the final sip of coffee you had at the outdoor patio table and the whisper of the word “beautiful” right before your last breath. Many people who you knew and loved will celebrate you tonight by screening a great doc that you never got to see finished called “Dying to Know.” We will dance, sing and laugh in your love. 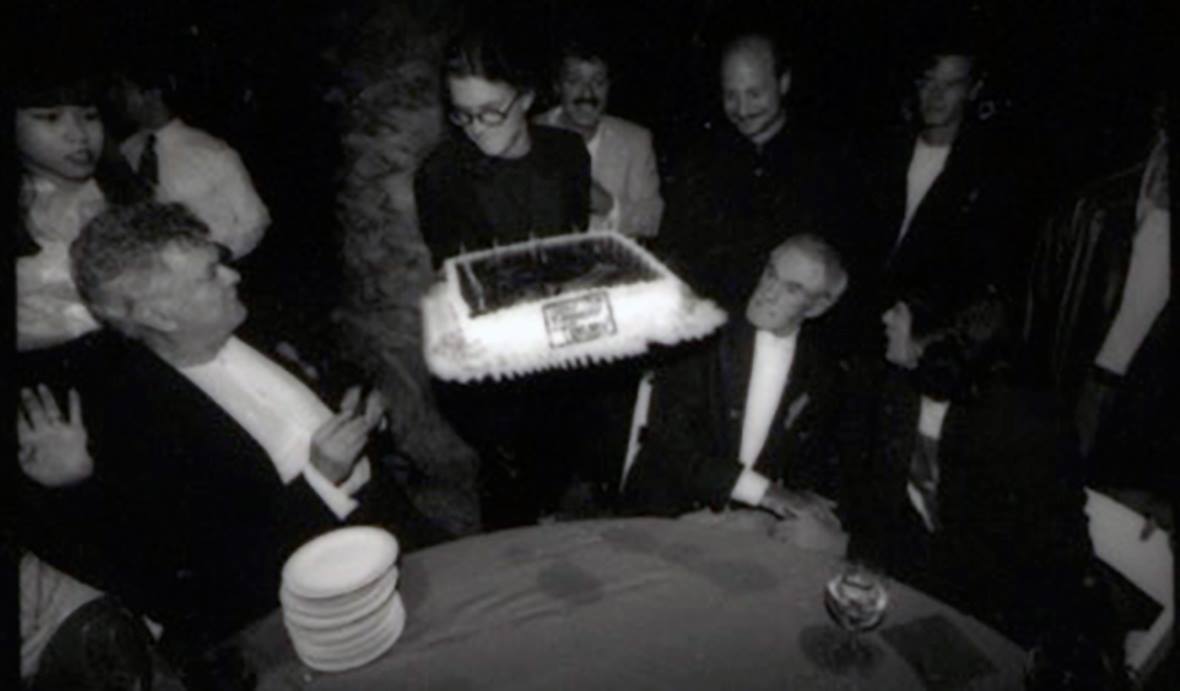