Moving past the spiritual normality around death and dying, I needed to take some space within words to reflect on what David Bowie meant to me, my family and our culture. It’s been three days since he took off for his home planet, leaving us all startled. I wanted to wait this long to post because I felt some space was needed to take a long close look that wasn’t too caught up in the emotion of the moment.

On January 8th, Bowies 69th birthday, Bowie released his 25th album entitled Blackstar. Three days later he died. If you go back and read the lyrics to the track “Lazarus” you can clearly see this was very intentional. He was saying goodbye. 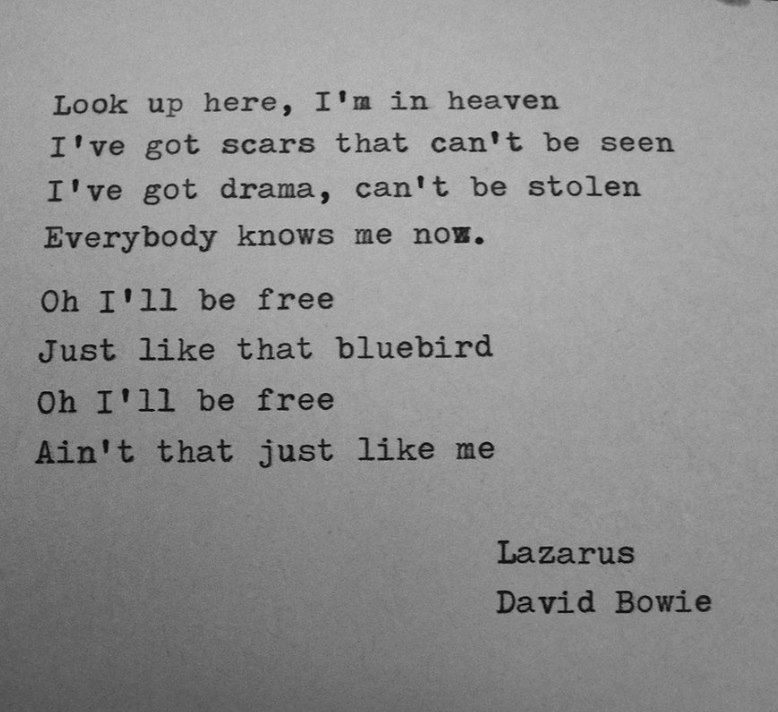 Who the fuck does that? That level of genius, bravery, wit, sarcasm and poetic beauty can’t even be understood just yet. Maybe it won’t go down as his best album musically (or maybe it might?) but it may go down as one of the most important statements ever made in rock and roll. To be able to face death and make your work about it while it’s happening in nearly real time is really the essence of being alive and honoring this incarnation. Running straight into the god damn mountain with reckless joyful abandon. I can’t think of another rock and roll star who has made their death also an artistic statement.

Art is life and death. Life and death is art. Maybe Bowie’s dabbling into the Buddhist trip exposed him to the bardo states of consciousness that allowed him to embrace the circular nature of all living things. Seems like that.

To even use the phrase “rock and roll” doesn’t even fit with David Bowie. Unlike, many of his peers Bowie transcended genre, cultures, classes and labels. Yes, he had a certain sound that remained un-mistakably “Bowie”, but in end it’s clear that music was just his medium for a much bigger expression. Not a classic rocker, not an art rocker, he was just an artist who used sound to weave together tapestries of fashion, rock, jazz, funk, sex, politics and multi media. Watch “Ziggy Stardust, the film, read the lyrics to “Young Americans”, listen to “Low” and then watch the video for “Lazarus’” – this is a 40 plus year career with some of the most elegant and consistent art making the world has ever known. This is Picasso or Edison.

On a historical level it’s the physical end of a very specific time in our history. The fact that there isn’t a David Bowie in physical form to contribute to the world around us is an ending of sorts. Rock, as we currently have it defined, is now dead. Knowing Bowie was always out there lurking in the shadows and ready to leap forward with a big statement has been a constant presence in the history of modern electric music. Yes, Dylan is left. So are members of the Dead, McCartney, Brian Eno, David Byrne, Neil Young and Bruce Springsteen. Even with these giants around, it still feels like there’s a void left in the present sense. Bowie was doing stuff that no one else was even considering. His constant desire to push forward into new territory was sometimes challenging but always worth checking out.

“If you’re ever sad, just remember the world is 4.543 billion years old and you somehow managed to exist at the same time as David Bowie.”

And most importantly on a personal level, this digs so deep and here’s why. David Bowie was my mom’s favorite musical artist. She raised me on his music. Not just the hits but all of it. Deep tracks too. As far back as I can remember every single Bowie album was there on vinyl. All the big amazing covers, the crackles of the needle hitting the record were the sound of my childhood. Pink Floyd, Talking Heads were also in there. Billy Holiday too. But it was Bowie that was the real centerpiece of everything she loved. So much so in fact, that she even styled her own look after him in the early 80s. She’d put out on display the covers of Aladdin Sane and ChangesOne (the greatest hits album) as sort of a mirror to her current style. As I came of age and I started to understand what this music was about it quickly became a part of my childlike zeitgeist of wonder and worship. When my parents went out at night I would play Ziggy Stardust loudly and dance around alone in the living room pretending that I too could be Ziggy. The first song that I learned to play on the guitar was “Space Oddity”. This was the fabric of the Learydrome when my mom was still the Queen.

Bowie’s death feels like a part of her died too. This may sound dramatic, but it’s true. It’s just an association that I can’t quite pin down, but feels so raw and potent to me. I’ve made peace with death many times in my life and am at peace with this one too. However, the magnitude will mark my life so far as “Before Bowie” and “After Bowie.”

They broke the mold after you David. In fact, you may have made the mold to begin with. Shine on.