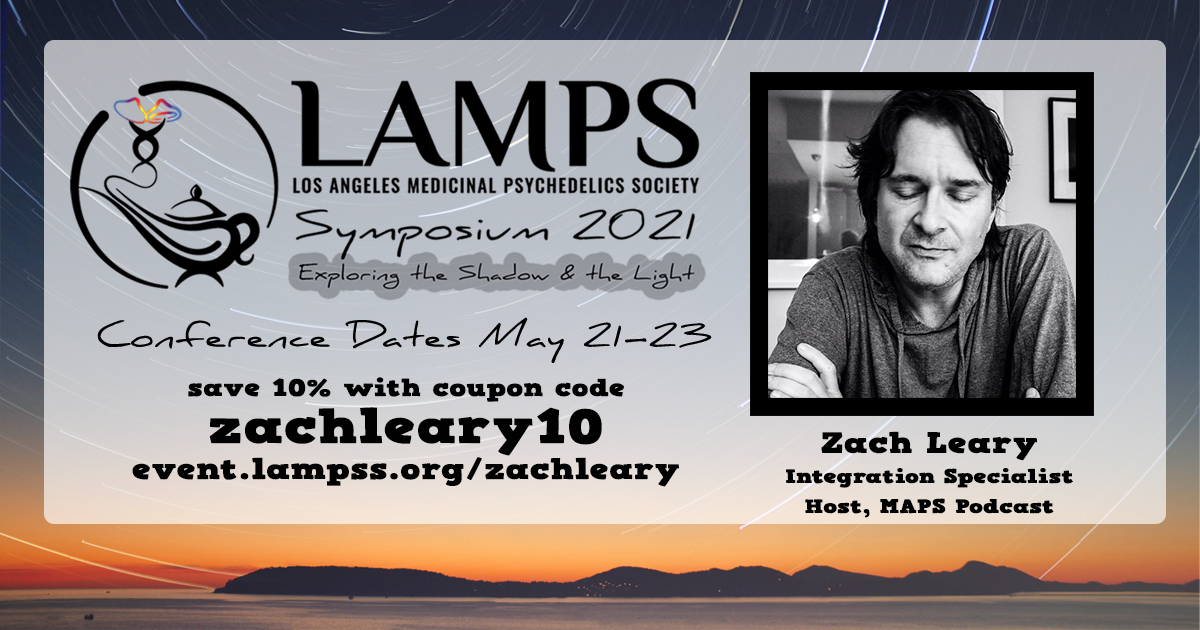 I’m honored to be invited back to the LAMPS conference on May 21-23. I’ll be speaking as part of two panels. One on integration and the other on the role psychedelics can play in substance abuse recovery. This event features some of the great minds within the modern day psychedelic movement and is not to be missed. This year is entirely virtual so you can beam in from wherever you may find yourself. Get your tickets now!

After a long hiatus of not having any online presence, I’m back. I was somewhat flattered that zachleary.com is now considered a premium domain and is for sale for a considerable sum. Sadly, that’s not in the cards right now so I had to let it go. This dot net domain name should work though.

For those that know me personally, you know why I went dark for so long. All I can say is thank you for sticking with me and for encouraging me to get healthy and start fresh. It took some time, but I’m feeling good and ready to re-emerge.

For those I harmed in 2019, I can’t even begin to express my regret and embarrassment. That said, I ask for your patience in doing whatever I need to do to make the situation right. It will take time but I promise you that I haven’t forgotten you and am doing everything that I possibly can.

For new friends in my new city, Austin, know that I’m here and am available for a variety of things. Kirtans, talks, psychedelic consults, etc…please feel free to email me at zachleary@gmail.com.

The Facebook event with all the details can be found here:

For people who know me well, know that I am the most anti new age, new age guy around. I’m deep in the gestalt but I’m constantly making fun of it at the same time. The law of attraction stuff could go either way for me, not sure I’m completely sold on it.

Anyway, this quote from the Abraham-Hicks channelers (the Law of Attraction folks) dug in real deep for me:

“There will be a time, not so far from now, that you will look back on this phase of your life and instead of condemning it or beating up on it…Instead of blaming or guilting, you will feel appreciation for it, because you will understand that a renewed desire for life was born out of this time period that will bring you to physical heights that you could not have achieved without the contrast that gave birth to this desire.”

I’ll be speaking at the Lucidity Festival in Santa Barbara, CA on Sunday April 12th! Hope to see you there. 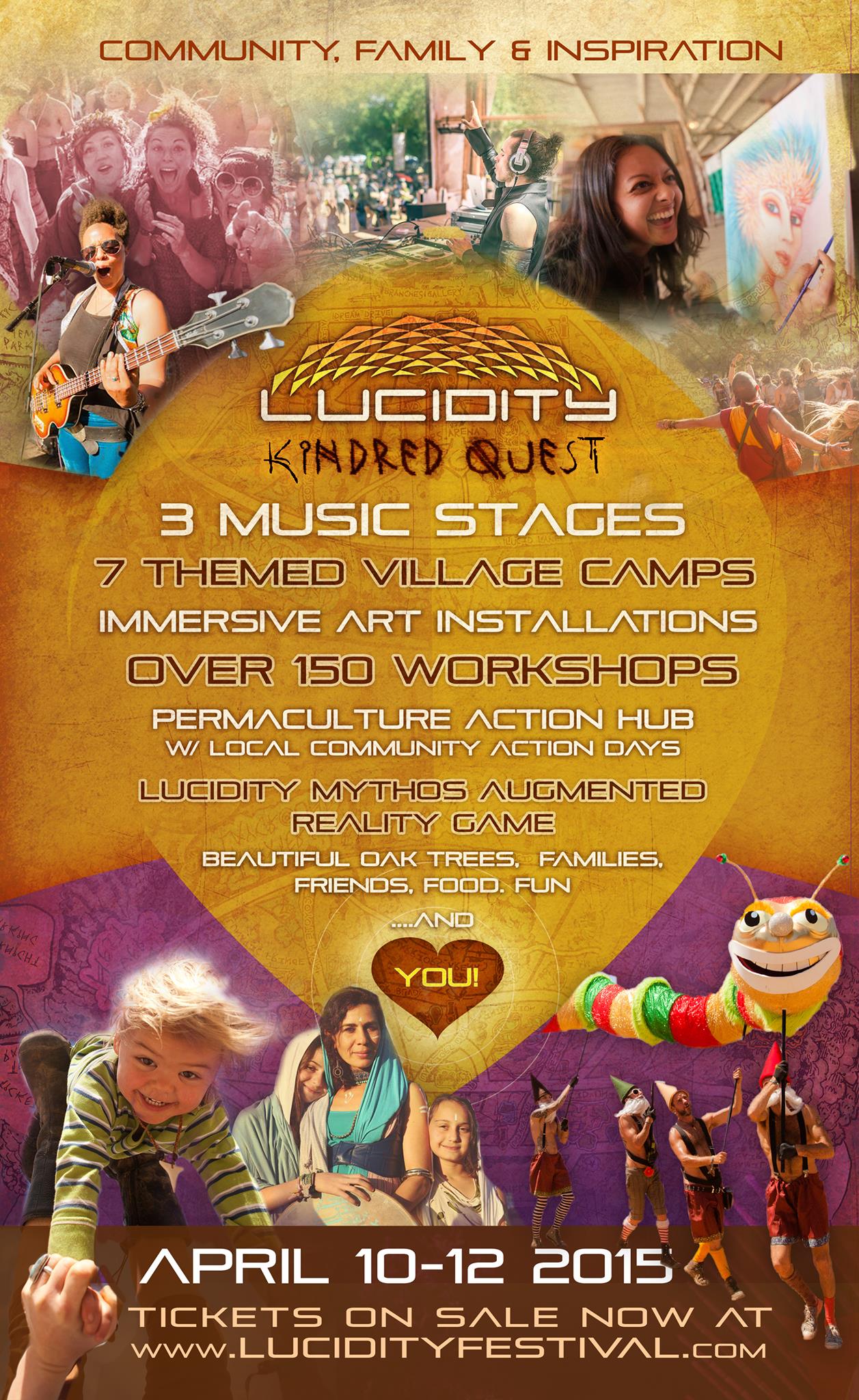 If you find yourself on or near Maui on August 25th come to the Ram Dass public satsang at the Makawao Union Church. I’m so honored to be leading the kirtan for this event. It will be a joy to share this practice with you and for our beloved Ram Dass.

The Meta Institute’s founder Frank Ostaseski will be joining Ram Dass as they will co lead an afternoon of dharma talks, meditation and reflections.

All of the details are below on the flyer.

Please join us on Saturday March 30th at Bhakti Yoga Shala for a screening of the new Ram Dass film “Cultivating Loving Awareness.” I’ll be leading kirtan to start off the evening at 7:30 p.m. with Dana Huffman, David Watts, Arjuna O’Neil and Dahveed Haribol Das. 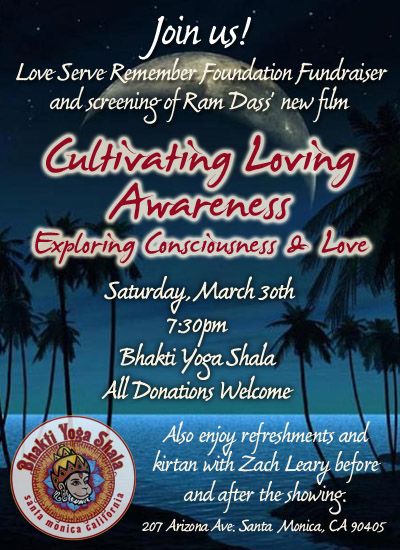 Today is Day 1 of an 18 day yoga immersion that I’m setting out on. The twist is that I’m doing one asana class a day for each chapter of The Bhagavad Gita. Eighteen classes for eighteen chapters. About mid way through the day (today) it occurred to me to go forth on this little experiment. So this is not something that is pre meditated or that I’ve put much thought into. However, a number of things fell into place today that makes this feel like it’s a worthwhile thing to do.

One, I’ve really been feeling the need to re-engage into my asana practice. It’s been sporadic lately and I feel a little disconnected from my body so that I’d like to remedy that. For as long as I’ve been practicing asana I’m not very good at it. I realize that just because there are some things that I can’t do physically, even after all this time, it doesn’t make me any less of a yogi but it does create a personal chasm in my own personal practice that I’d someday like to fill. Second, I started rereading the Gita this morning as I do a couple of times a year and the thought occurred to why not combine the two activities. The Gita is my core manual for a spiritual life and if one looks closer perhaps there could be some correlations between the wisdom that Krishna speaks and ones personal struggles (and triumphs) when engaging on a mini immersion like 18 days of consecutive yoga.

Additionally, it’s an interesting undertaking because the Gita has nothing to do with asana and asana has very little do with the Gita. I’m an expert on neither which also creates an interesting opportunity to reveal little nuggets of clarity that haven’t appeared to me before. Blogging about this will be a self indulgent mess at times but maybe through that mess a discipline will arise that will force me to put pen to paper thus holding me accountable to finishing all 18 days in a row. I’m lazy so this may be the perfect way to work through that!

In Chapter 1 the stage is set for the battle that our protagonist, Arjuna, must undergo. Arjuna must engage in a fierce battle against his own family members to restore control and dignity to the kingdom that is rightly his and his brothers. Their evil blind uncle Dhritarashtra is one the other side mobilizing his armies to take down Arjuna and his brothers on the battle field. Right as the battle is about to begin Arjuna sees the internal conflict and begins to question everything about the nature of life, war, virtues, purpose, God and so much more. The good news that Arjuna’s charioteer and most trusted spiritual advisor also happens to be the supreme personality of God himself, Krishna. So while in peril Arjuna has the right guy around to ask questions to. The answer to these questions come from Krishna in the chariot on the battle field and is “The Song of God.”

In Chapter 1 the core metaphor of battle and war is set. In many orthodox Hindu traditions the war element is taken quite literally under the understanding that while war is inherently evil it is also the dharma of a certain class to fight just wars. However, in the mystic traditions of ancient India the war is a metaphor for the wars and battles that we must all fight on any given day. The great sages, saints and rishis of ancient India are mystics and this is the point of view that I relate with and will discuss. It’s a very important distinction and what that must be clarified.

The war within my own mind on whether or not I have the ability, discipline and wherewithal to accomplish a modest task like 18 days in a row of yoga is potent and there is no better manual than the Gita to reflect on my progress. The war within my own mind has also been very juicy lately. Not in a self doubting torturous way but in more of a reflective way that is forcing me to look at my journey with more sensitivity to the things that I really want.