Mostly I get pretty resistant and challenged when I’m asked to speak on “growing up Leary.” Over the years, I’ve learned to make friends with it and can probably let go any future attitudes around it. Jonathan Thompson who runs this podcast is a really nice guy and did a great job at hosting this all around discussion. It transitioned from the life at home with Tim stuff to many great topics ranging from spirituality to addiction. I revealed way more than I thought I would. Enjoy. 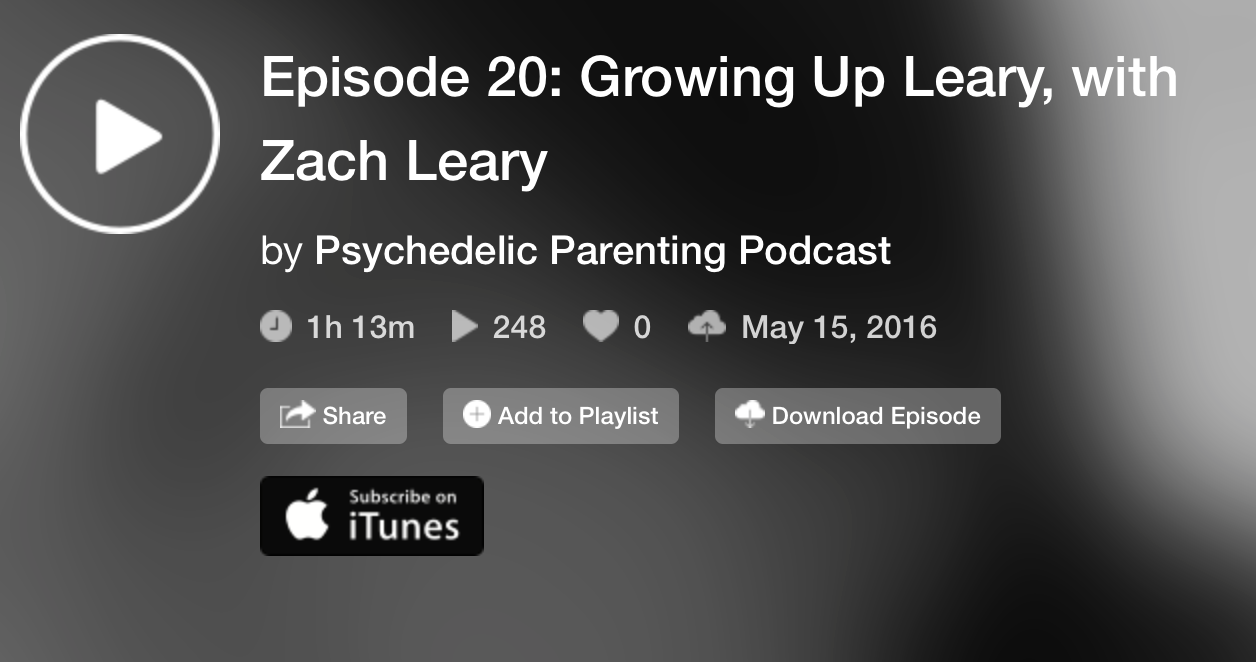 In the mid 1980’s, how I’m not exactly sure, my parents began befriending the film maker Tony Scott. During that era it was no surprise really as they were on the A list of the Hollywood Social Elite. But Tony was different – he was into fast cars and fast women, was fresh off the heels of the uber blockbuster Top Gun and had an overall tough guy demeanor that at first made him an odd fit to be friends with my parents. Stranger things have happened I guess. At that time, Tony lived on Angelo Dr about one mile up from our house in Benedict Canyon. Thus began a neighborly and family based friendship that lasted many many years.

As the years went on it became really noticeable that Tony’s tough guy englishman bulldog exterior was really an act. It was a device he used to craft a persona that allowed him to direct movies that has his unique stamp of action, intrigue and thrills. But that wasn’t really him on the inside. Once you got to know him he was a soft, sweet and gentle as any man you’d ever know. He also was the hardest worker you’d ever seen. No matter how late the night went he’d always get up at 6 am for his morning jog and then to the office or studio to either plan his next film or to make his current one.

In 1988 my parents clearly (and wisely) noticed that I could use a stable person in my life to be there no matter what happened so they made Tony and his then girlfriend Tania my godparents. It was incredibly sweet. Upon the night of the celebration of that event Tony gave me a VHS camcorder in hopes of my one day becoming a film maker. That didn’t happen obviously but I’ll never forget it. And on my sixteenth birthday Tony gave me the money to buy my first car – the beloved ’72 VW Bus. By the time I was seventeen the bus was such a disaster of a lemon that he went out and got me a super cool ’81 Jeep CJ7. It wasn’t so much about material things as it was about him doing things that my parents could not do and about unsurpassed generosity. Looking back on it, the car thing was funny. He knew my VW Bus was going to be a disaster, the Jeep was his tongue in cheek way of saying “i told you so.”

When I was about sixteen I took an interest in Tony’s films and became mesmerized that my godfather was this gigantic Hollywood movie director. Over the years I was so thrilled to get to visit the sets of The Last Boy Scout, Crimson Tide and others. It was such a thrill to see how it all worked. While I eventually became pretty far away from Hollywood in my adult life those days left an indelible mark on me that reinforced how great Hollywood could be when someone focussed on their craft and not trying to be famous. Tony was a craftsman through and through. His attention to detail was impeccable. So much so that he even did his own story boards for his films. Unheard of.

In the middle of all of this Tony and Tania really became our family. During Tony’s morning runs, he would venture a mile down to our house and drop off his dog “Little T” to play with our dog “Bo” for the day. This was a regular routine that went on for years until Tony moved from Angelo Drive. Eventually, Tony and Tania split and Tony met his soon to be wife Donna. Donna was a sizzling hot blonde hair blue eyed Southern Girl from North Carolina who pretty much became my teenage friends wet dream. She was sweet, down home, funny and did I mention hot? As close as we were with Tania the transition into Tony and Donna was rather seamless. The family continued. For years my parents and I hung out with them in Benedict Canyon and also down at the Scott’s beach house in Malibu. As I got older, I took notice that Tony wasn’t a counter-culture guy and Timmy wasn’t an action film guy. It was an odd couple relationship. Yet the friendship between them was genuine and pure.

In the summer of 1992 my mom and my dad split which left me in shock and my dad to fend for himself. I don’t think many people are aware of how much Tony Scott actually helped Timmy. From ’93 to ’96 Tony and Donna really became our go to friends that could help take care of Timmy as he was getting sicker. To make a long story short – Timmy’s death would have been a very very different situation if it weren’t for the kindness and generosity that Tony gave to us. He allowed Timmy to die at home with grace and dignity.

Additionally the bond between the Scott’s and Leary’s was so strong that to this day the executors of the Timothy Leary trust are Donna Scott and Denis Berry, a beautiful soul who came to us also through Tony’s kindness.

I could go on and on with endless stories about Tony’s laughter, dinners at Mr. Chows, Hollywood mischief, his generosity, and his friendship. Early on his guidance to me was so strong and palatable. Perhaps I wasn’t the best godson but I’ll never forget Tony. While we weren’t part of each other’s day to day lives in recent years the Scott’s will always be part of my family. I really wanted to write this post to let the world know the impact that this beautiful man had on my families life. Opposites perhaps, but good souls to the end.

He leaves behind his beautiful wife Donna and their two sons Frank and Max. Tony’s legacy will be one of legend. They don’t make them like that too often. I love you Tony and godspeed. Thank you for everything you did. You changed my life for the better.

In 1988 I started following the Grateful Dead pretty heavily. I immediately became transfixed with the idea that on any given night something magical could happen. The far out part was that it wasn’t every night. Some nights the band would mine for gold and come up dry. The juxtaposition between conjuring up magic on some nights and just trudging through the chord changes on others was remarkable. It was so interesting to me that a band of this size would risk so much to find the essence of magic, of God, by engaging in a musical dance with each other and the audience.

The addition of LSD was like adding jet fuel to an already burning house fire. It took me from 60 to light speed without a seat belt. There I was, a young impressionable teenager, being thrusted into a vortex of sound, vision and community. To this day I believe that Jerry Garcia was a great sorcerer. Casting chants and spells hoping that one of them would catch fire and set our minds ablaze. That happened often. Even then I knew it was an expression of God.

The problem, of course, was that there was no operating manual for life outside of that sacred arena. Well…if there was no one shared it with me. Perhaps I was too quick to be searching for the peaks and I forgot to cruise in the valleys. Insert metaphor here. Strong was the quest to “get there again” that I wasn’t aware of any discipline that could help me integrate this living and breathing magic into the daily mundane. Life went on.

Cut to May of 1996. My dad died on May 31st of that year. Many people were gathered around his bedside kinda just watching him take fewer and fewer breaths, it was all happening. I had never seen anyone die so naturally I was caught between the sadness of losing my father and the fascination of watching the transition. When he took his last and final breath a burst of energy flew into the rooming filling it with a beautiful glow and transcendent vibration. Just as quickly as he was there breathing in one moment, the next he was floating above me in a vibrational form having left his body temple. The energy dissipated quickly (so I thought) and there he was lying there, an empty vessel. The hyper awareness that his body was now just an empty physical form with no life force in it was without question the defining moment of my life at that point.

Where did he go? What are we made of anyway? What defines life – body or soul? How can a soul manifest as a personality?

So the words weren’t as defined as I now know them to be, but from then on it was my feeling that a supreme love intelligence body of energy permeated throughout the universe. Everything had so much in common with everything else. Energy moves from one place to another manifesting in leaves, trees, dirt, the ocean and human beings. And sometimes that energy can cary so much supreme intelligence that it manifests in magic or realized body temples such as Yogis or supreme personalities of Godhead. And our journey avails us to many tools and paths that can help us get in touch with that sacred field of energy. That’s the sadhana, the work, that is required of us – to seek our own relationship.

To be continued…happy Jerry week.