As you traverse the landscape of this thing we call life there are an endless amount of activities to take note of. Some of that activity manifests in a way that takes on physical shape – energy and matter are made of the same stuff, that sort of thing. Other activity takes form in how you see other humans living their life and their own personal lila.

Very quickly – the word lila comes from the sanskrit language and translated it means “divine play” in the context of ones own life. So you’r entire life is a play of divinity in which all the ingredients that make up a play thus make up your life. Success, love, tragedy, heartache, all of it. That’s your lila.

When observing someone elses lila why is that most of us fall into the mode of judgement and ridicule? Why is it that we simply can’t create a world in which literally everyone can live in peace and prosperity without active judgement and persecution?

There may be logical answers to this question. Morality and values comes mind. For instance, someone like Sam Harris can make a very articulate and thoughtful case that in order for our society to evolve that we must take note of ISIS and break down why their entire theosophical way of living is completely fucked up and thus a detractor of progress. I’m certainly not going to spin any new age anti-intellecualism and suggest that who are we to say that our morals are better than theirs? Certainly, I agree that it’s impossible to form a world that abides by a doctrine that says you must kill those that leave the faith. There is a certain barbaric aspect to much of the radical tenets of Wahhabism. I agree.

Where I get lost however, is the suggestion that the entire muslim faith is out of their minds (and then list reasons) much like Harris and Bill Maher do on a regular basis. When one side elevates themselves into a realm of superiority based on logic and reason it gets into the game of separation. No one benefits from saying that 1.6 billion people are out of their minds and need to change the way that live. With the modern world the way that it is that sort of dialogue will do nothing but result in more war, finger pointing, name calling and political escalation that ends up being a policy based excuse to escalate the war machine.

I’m tellling you – this method will not work. I think the doorway in needs to be far more compassionate and systemic.

Until we learn to not install our values on the entire world, no matter what, we will never know peace. I’m not suggesting ISIS gets a free pass but I suspect that if the US didn’t conduct so many foreign policy blunders in the first place that combined with the US idea of manifest destiny that ISIS would be in the forefront of the current conversation. ISIS just didn’t rise out of nowhere, out of nothing. It didn’t just appear because there were such a surplus of radical Islamic practitioners that needed to form their own state, an Islamic State.

If you forgot what the concept and mission of “manifest destiny” is and how it is defined, I encourage you to look it up and revisit it. It is so brazen and arrogant that it may shock your sensible values of the spiritual aspirant.

I initially got worked about this topic because of some podcast that Sam Harris rambled on about when trying to get everyone to read Dabiq, the magazine of ISIS. I too posted the same quest on Facebook thinking that it’s a good idea to understand how everyone is thinking, even if they are mad. It really pissed me of that Sam Harris called Chomsky and Greenwald “dangerous” for suggesting that US foreign policy played a part in ISIS’s hatred to us and that in fact George W. Bush was correct when he said “they hate our freedom.” First of all, Bush was not talking about ISIS when he said that – the landscape was so different back then that’s it not fair to say this was in fact true.

Many dozen global economic chess moves were played for decades that allowed that soil to get so fertile in the first place. Again, these things don’t appear out of nowhere. The basic problems of the US middle east policy still remain true – the presence in Saudi Arabia (the holy land), the support for Israel and the destruction of Iraq that split the country into warring tribal factions that we don’t understand.

Foreign policy dissection aside, I do come back to the idea that the attitude that exists  that suggests being a muslim sympathizer isn’t morally correct is also faulty. I realize that it’s often not so simple but I’m a human being sympathizer. I think we all have a place here to worship, exist and govern in the way that makes sense to ones true nature. The fact remains that a large portion of the global Islamic population enjoys being Islamic. It speaks to their heart and path. Yes, I find many of their extreme dogmatic instructions to be slightly insane –  however, I wish to leave them alone and let them figure out their own karmas. Again, a very powerful coalition of governments telling them that they are dangerous only makes them more dangerous. This is a fact. Instead, if we lead by example and make the opposite of their lifestyle attractive, calm, wise and loving that that will follow by attraction.

A few days later, Harris once again sent something out to his people, a speech that he thinks Hilary Clinton should make in regards to the muslim faith and how her position is different than her opponents. He was right on in saying that “Every religious community must interpret its scripture and adjust its traditions to conform to the modern world.”

That may be the best thing he ever said. The rest gets a little murky because he’s once again making Islam the hyper-focus here when it is not. It’s a symptom of the world not getting along and a symptom of dogma once again leading the left foot along the path.

For as long as we’ve recorded history we have known war. It haunts us like a virus that can’t be killed. What will change? I don’t subscribe to the philosophy that some war is just and therefore we must arm ourselves and constantly prepare because the enemy is near. That is a hallow and empty way to live. That is akin to settling for less. I’d much rater accept that peace is the only option and war is a strange anomaly that happens from time to time, but must be extinguished as quickly as possible when it does. And until we start changing our attitudes in how we see each other on the landscape of life nothing will ever change.

I’m on Team Human. I’m not on Team America, or Team Christian or Team Democracy. I’m on Team Human. I’m not going to go point by point on why 1.6 billion people need to change their way of life. Even if they probably do. But so do the people we now call the “alt-right” (Trump supporters) or so does a country that throws out 50% of it’s food. Think about that. This amazing nation of bounty and progress throws out 50% of the food it makes. Are we that fucked up and self destructive to think that’s ok? To me – that’s just as twisted as Islam extremists murdering women in these so called honor killings. Some people may find that offensive and I don’t mean it to be. I don’t think it’s ok to engage in these honor killings at all, obviously. But the point is no one here is getting out free of charge. No one can turn the lens on the other and place blame entirely on them.

Once again – I’m on Team Human. We all need to collectively view our part in this lila and take accountability for what we can immediately fix within our own sphere of influence. We need to do this while we simulatneously stop pointing fingers at others and what it is THEY need to do. If we could all exhibit a little humility here and admit that we’re in this together and we’re all complicit in the insanity, then we may have a chance in fixing all this.

My prayers are with the victims in Paris, om shanti. But I think this world is already in a state of full on crisis. What happened in Paris didn’t change my view of that one bit.

It’s somewhat alarming to me that we collectively seem to value a life in Paris more than we do a life in Beirut (43 dead, same night, same kind of ISIS bombings) or when 147 were lost in a Kenya last April at the hands of Al-Shabaab. I don’t see people changing their FB profile pictures to that of a Lebanese flag? Somehow we value a life more when it’s taken in a beautiful Western city where we take our vacations, go to museums or where U2 has to cancel a concert (as they are doing today.) Part of the problem is that we’ve become so segregated as a global community and far too nationalistic. We are all Earthlings. All of this talk about borders and nations and the incessant focus about where these things are happening needs to stop. These things happen all the time, constantly. They are happening, period. Everywhere.

The guru system conjures up a lot of different ideas, some good and some bad, for different people. However, I encourage anyone reading this post to forget anything you think you know and dive into the love portal that is Neem Karoli Baba. Check out this podcast but also get the book “Love Everyone” and go beyond dogma and straight into a map of consciousness that may pry you wide open.

The podcast can be found here

Get the book here 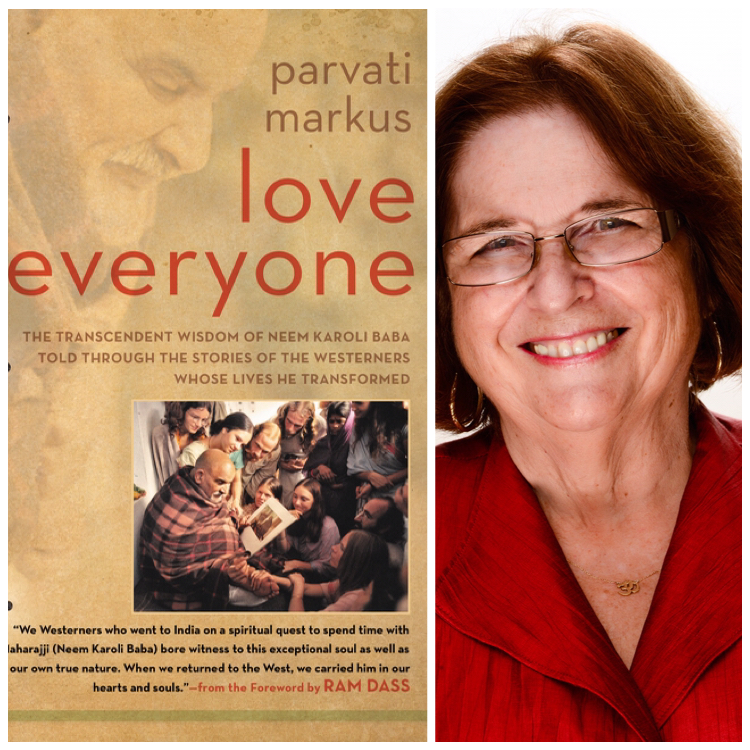