I’m delighted to have been selected to take part in this blog project, Ram Dass Now that is exploring the various themes surrounding the 40th anniversary of Be Here Now. The Cyber Soul satsang is in full effect. I kicked it off with the first post – check it out! 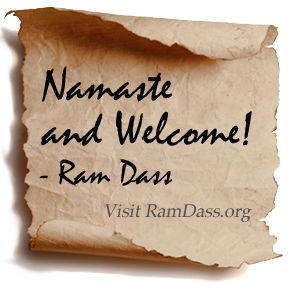 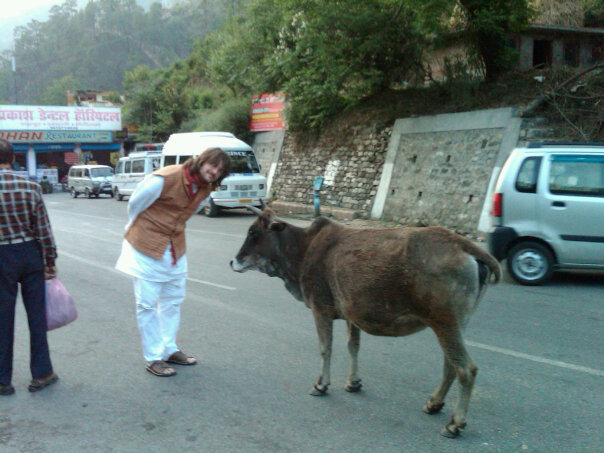 Freshly returned from Kainchi. I’m not sure where to even begin. For such a short trip (10 days) we packed in so much of India’s delightful and chaotic mystic love. Being in the Neem Karoli Baba Ashram with Siddhi Ma had a sublime dance to it. It helped me to understand the power and significance of Ram Dass’s original 1967 journey even more.

This picture was taken right outside of the temple with a new friend. More soon…

Writing about myself is a laborious exercise that I do not wish to engage in. I’ve often found that while I have many good tales to tell that actually putting them down into a digestible bits of sentence structure is tricky. Someday I will seek guidance from the gods and take another whack at it, until then I’m going to keep the self indulgence down to the bare minimum and write about things that interest me.

2008 was generally a very good year. Professionally, I found myself unceremoniously jettisoned from the advertising world into the music business. Much to my surprise, it’s worked out nicely. It seems that the music business has room for someone who thinks about branding, campaign ideas and how audiences are spending time in the digital world. There are still dozens of others who make sense out of the touring business, how labels work (or don’t), PR, radio promotion and the other tactics that music relies on to make it into ones earbuds. How it all works together is anybody’s guess. I keep saying that if anyone has the future of the music business figured out they are lying.

I’ve just returned from Sao Paulo, Brazil and San Francisco, CA. Sao Paulo is where I’ve, more or less, called home for the past 15 years. I do reside in Los Angeles but my family house slipped into mythic status some years ago while leaving no physical proof that any of it actually happened. So by default, the lovely home in Sao Paulo where my mother and her companion live is my closest thing to “home.”

San Francisco was home to the two night New Years run of Bob Weir’s Ratdog and Phil Lesh and Friends. No matter how old they get or how far away Jerry seems, I have to attend as many of these dead relics as possible. It’s just so great to hear the songs! Perhaps, a more detailed review will follow. Until then, I’m psyched for The Dead’s 09 run.

People often ask me about the state of Timothy Leary affairs. Unfortunately, this is a slow moving process that I have no answers for. Most hasn’t changed in the past year – there is no update on the archives, there is no update on a feature film project and many of his books are still out of print and hard to get. The good news is that there is perhaps a glimmer of hope with the leary.com site. It seems that the ever passionate Denis Berry and Joi Ito have enlisted the help of one Lisa Rein to direct the proceedings of that site and another more archival effort into reality. Leary.com has only a minor update at this moment but there are some talks with Chris and Joey to give it a decade long needed jump start. We’ll see. The archival site, http://www.timothylearyarchives.org, actually exists and is quite fun. In order to get really deep and sticky it requires a hefty investment to digitize all of the archives in order to get them into a web friendly form. Many avenues are being pursued on that front. If you want more concrete information on any of this you can contact Denis Berry at [email protected]

Culturally, my round up is as follows:

Shows I went to – some more than once and in no particular chronological order. Festival sets are also included.

There might be a few others that I’m forgetting…

Albums I loved – in no particular order

Amazons Kindle – I myself do not own of these but i was tasked with bringing one down and loading it up. I give it 8 out of 10 stars. The digital paper screen is extremely readable and as non digital as could possibly be. Something about the quality of it adds an analog texture to it that is certainly conducive to reading books. I would guess that Amazon took some cues from Apple – the opening of the box is quite rewarding, the set up is extremely easy and the product design is elegant. However, Amazon has no Jonny Ives and some of the devices flaws are within the product design itself. There is no reason why the alpha-numeric keyboard needs to be slanted like that, its extremely annoying. Also, there is a “next page” button on the left that does not need to be there – it fucks up the equal weight distribution of “previous” and “next” that should exist. This is a first generation attempt – it will be really interesting to see where this product lands 2 or 3 generations later.

It is a small miracle when you turn it on and it instantly connects to the Sprint 3G network for speedy downloading. That alone is worth the price of admission and the back order wait time. Kinda makes me wanna become a reader.